Sri Lanka’s work in the creative industries recognised in UK

Linda Speldewinde, known for pushing the power of design in Sri Lanka and incorporating creative innovation into the local economy, recently received a rare international honour from one of Britain’s most prestigious universities.

Northumbria University UK presented the honorary doctorate to Speldewinde recognising that a modern force of creative innovation with global relevance has been alight in Sri Lanka, bearing major significance to the international movement emerging in Sri Lanka. 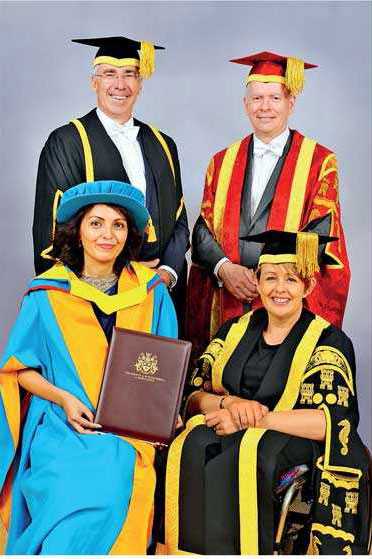 Northumbria University UK Vice-Chancellor Professor Andrew Wathey in his invitation to Speldewinde to accept the award stated how each year, Northumbria University awards honorary degrees to individuals who have achieved the highest national or international prominence in their field and invited Speldewinde to accept the award presented at the University’s academic congregation ceremony which coincided with the ‘The Great’ Exhibition of the North, on design and innovation where the university and city was transformed to showcase the North’s trailblazing role in shaping art, culture, design and innovation, as well as its role in building the economy of tomorrow.

In extending this invitation, he stated how the University wishes to acknowledge Speldewinde›s global reputation as one of Sri Lanka’s leading entrepreneurs and how she has used the power of design and has made an impact on education, the creative sector, rural crafts and communities, as well as social and cultural sustainability. He went on to highlight her as a stellar example for the University›s current students and global community of alumni, of what can be achieved through dedication and creative talent.

At the ceremony Professor Steven Kyffin introduced Speldewinde as one of Sri Lanka’s leading female entrepreneurs. The official citation excerpt read: “In 2001 Linda founded the Academy of Design in Colombo and went on to conceptualise and launch the Sri Lanka Design Festival in 2009. In 2010 she founded Island Craft, linking design with rural communities, there by growing an emerging creative and entrepreneurial culture. Just one year later she set up the Design for Sustainable Development Foundation and in 2015 she launched an online fashion brand, fashionmarket.Ik, as well as the Mercedes-Benz Fashion Week – Sri Lanka project.”

He reaffirmed Speldewinde’s driving force “the need for the impact you can create with good design in Sri Lanka to effect lives and improve it for many. Design is more than a creative discipline for Linda. She believes that design can make an impact on education, rural crafts and communities in her country, and that this, in turn, will lead to social and cultural sustainability in Sri Lanka. Northumbria University shares her bold ambitions. We also believe that design can be a tremendously powerful force for change and for social benefit. There is little doubt that this Sri Lankan entrepreneur will go on to further extend her influence on design, sustainability and education on a global stage. She is unmistakably an exciting person to watch – and someone who can inspire and make a real impact on the world.”

Kyffin ended his citation with the closing words, “Chancellor, in recognition of her focus, commitment and achievements in design, education and sustainability; and for her sustained belief in the power of design to change the world, I present to you Linda Speldewinde to be admitted to the degree of Doctor of Civil Law, honoriscausa,” which is a great honour for Sri Lanka.

The award was made in the presence of 1,500+ plus audience and in her acceptance speech, Speldewinde spoke about the work in Sri Lanka and  how privileged she felt in  the opportunity to share in such a significant experience, she expressed her deep and genuine appreciation to the Northumbria University in honouring her in such a significant and meaningful way and assured them of the value the award had in the continuance of the work, her efforts and vision in creating impact through design, a vision that build livelihoods in the rural communities of Sri Lanka, which drives industry and empowers women.

She added: “It supports the fate of young talent and helps my country play the role to be a catalyst for creativity and innovation in the South Asian region and act as a hub for the creative industries and design driven impact. In other words, using design to make a real difference. So, in honouring me today you also honoru the many who are part of this work and who have been associated with trying to make it all happen. The award has given me renewed strength and most importantly admission in to a global community of change makers. I will continue to dream big because dreams are really for those who believe in them and for those who see the world as can be and more than it really is.”

Speldewinde sharing comments with Daily FT announced how she would use this award for Sri Lanka and use the global network to drive more impact. Linda is behind the recently-initiated discussions on forming a national policy for Sri Lanka’s creative industries, and will be collaborating with the government, the private sector and her international network to take it forward by 2020.